At the head of the Church at the top of the window is shown the symbols of the Holy Trinity. You will notice that the quatrefoil design Is placed within the circle – the quatrefoil design being symbolic of the four evangelists. The circle is used as a symbol of the Eternal Father as having one beginning and ending and is considered the sign of perfection. This symbol was also used by the Jews who inscribed within the circle three Yods. A Yod in Hebrew means hand and is symbolic of strength and power, and as no one has ever seen God at any time, the symbol of the hand denoting power was used entirely by the early Christians in representing the Supreme Being, God.

On the left is the symbol of the Lamb, representing Jesus Christ the second person of the Holy Trinity, and on the right is the Dove symbolizing the Holy Spirit, the third person of the Holy Trinity. In the lancet openings are medallions and shields whereon are placed the symbols of the Twelve Apostles and the Four Evangelists. In Medieval art there was given to each of the Apostles an emblem or an attribute symbolizing some personal or historic value.

The Apostles and Evangelists appear in this order (from top to bottom and from left to right).

Andrew was a fisherman with his brother Simon Peter. His intimate friends were James and John, who also became ardent disciples of Jesus. Andrew was bound to a cross, rather than nai led, in order to prolong his suffering. The most common symbol of St. Andrew Is a cross shaped I ike an X. Sometimes two fishes crossed to form the same design are used. At other times two fishes placed in his hands to show that he was a fisherman (Matthew 4: 18) are found in symbolism.

James the Less, the son of Alphaeus, is also called The Little because of his small stature; often he is referred to as The Minor. According to tradition, James at the age of ninety-six was thrown from the Temple by the Pharisees, and an infuriated mob stoned him as he prayed God to forgive them, and someone repeatedly beat his head with a club. Ever since, James the apostle Is represented by a fuller’s bat or club. He is shown in paintings as leaning on a club. However, he is symbolized at times by a saw with the handle uppermost, and again by three stones.

Bartholomew and Nathanael are held to be names for the same person, about whom the Bible telIs very little. Jesus said of him, “Behold an Israelite indeed, in whom is no guile!” (John I :47). According to traditional information, Bartholomew won King Polymus of Armenia for Christianity. But it happened that the brother of the king was so angry at Bartholomew that he had him flayed, crucified with his head downward, and even beheaded. The symbol of Bartholomew is three flaying knives or one flaying knife, referring to his martyrdom. Sometimes he is pictured with a book (the Gospel according to Matthew) in one hand, or with an open Bible and a flaying knife.

Paul as one of the twelve apostles is sometimes symbolized instead of Jude. His usual symbol is an open Bible with a sword behind It. The Bible bears the inscription Spiritus Gladius, meaning “Sword of the Spirit”. Sometimes he is represented by two swords crossed, the one having reference to the good fight of faith that he fought, and the other to his martyrdom by the sword. Other embIems are the armor of God and a palm tree.

Since it is thought that his Gospel dwells more on the human side of Jesus Christ than the other Gospel records, Matthew is usually pictured as a winged man. Sometimes, however, he Is pictured with a book or a pen, with an angel in the background dictating or pointing to heaven.

James the Greater, who is often referred to as Boanerges, James Major, or James the Elder, was one of the closest friends of Jesus, as we gather from the Bible when references are made to “Peter, James, and John”. James was the first of the apostles to suffer martyrdom, dying under the sword of Herod Agrippa I (Acts 12:1-2); here we find partial fulfillment of Jesus’ prediction that the brothers should indeed drink of the cup. Stories abound which tell of James founding churches in Spain. The symbolism of James the Greater usually consists of three scallops, referring to long pilgrimages; or the pilgrim’s staff; or a pilgrim’s cloak, with hat.

Luke Is symbolized by the winged ox because his Gospel opens with the sacrifice of Zecharias and emphasizes in the latter part the sacrificial death of the Savior. Sometimes the symbol shows the Gospel in addition to the ox.

Matthias is practically always substituted for Judas Iscariot. The story concerning the election of Matthias can be found in Acts 1:15-26. The double-edged ax, in conjunction with a stone or the open Bible, is his most common symbol. Sometimes, a lance with three stones, or a book and sword are used.

Peter, the early leader of the apostles, was the first to say that Jesus is “the Christ, the Son of the living God” (Matt. 16:16). It was Peter who denied three times that he knew Jesus “before the cock crows twice” (Mark 14:72), an incident memorialized by a cock pictured as crowing. Later he occasioned the first great increase in the Church through the sermon delivered at Pentecost, and he made many missionary tours. There are numerous stories concerning the death of Peter. The story that is most popular relates that he was unwilling to die on the cross in the same position as his Master was crucified. Those who hold to this manner of Peter’s death sometimes symbolize him by forming a cross with the horizontal bar toward the bottom of the vertical bar. WhiIe the humility of Simon Peter in this story is heartening, the manner of his death, probably as a martyr in Rome at the close of Nero’s reign, is uncertain. Simon Peter is usually symbolized by two keys that are crossed in the form of the letter X. The keys refer to Matthew 16:19, where it is recorded that Jesus said to Peter, “I will give you the keys of the kinqdom of heaven, and whatever you bind on earth shall be bound in heaven, and whatever you loose on earth shall be loosed in heaven.” Reference is made to heaven and earth when one key is gold and the other is siIver. The two keys represent the power to bind and absolve (loose). They are also symbolic of the spiritual authority of the Church (see Matthew 18:18).

Mark is pictured as a winged lion. The lion, as king of beasts, represents the royal character of Christ, and refers to the opening verses of the Gospel which tell about “the voice of one crying in the wilderness.” It may also be said that Mark’s emphasis on the resurrection is indicated by the lion, for, according to an old fable, the cub of a lion is supposed to be born dead and after three days licked into life by its father.

In company with Zebedee, his father, and James, his brother, John’s early life consisted largely of fishing in the Sea of Galilee. John was a quiet and thoughtful man. The Bible refers to him as “the disciple whom Jesus loved.” When Jesus was crucified, John took Mary, Jesus’ mother, and provided a home for her through the remainder of her life. The serpent issuing from the common cup is St. John’s most usual symbol. There is an interesting story connected with it that an attempt was made to poison John, but the attempt was unsuccessful because the poison vanished in the form of a serpent. A more probably basis of the cup as the symbol of John is the reference of Jesus that John and James should drink of his cup. Sometimes John is symbolized by an eagle rising from a large cauldron or kettle, referring to his miraculous deliverance without injury from the Emperor Domitian who tried to take his life by putting him in burning oil. Sometimes a book or scroll is added to the eagle because for centuries it was believed he wrote the fourth Gospel, three Epistles, and Revelation.

The eagle denotes the evangelist John. The spirit of the Gospel of John, formerly thought to have been written by John the apostle, is like an eagle soaring to the throne of grace.

Simon was a member of the Zealot party. He was successor to James the Just as bishop of Jerusalem. A fish on the book is the symbol of Simon. The fish refers to his success in fishing for men through the gospel. Sometimes one or two oars appear on the shield with a battleax or a saw. He was another martyr of the faith, having either been “sawn asunder” or beheaded.

Jude was referred to as Thaddaeus, Labbaeus, or Judas Lebbaeus. The Bible records but one question that he ever uttered, “Lord, how is it that you will manifest yourself to us, and not to the world?” (John 12:22). Tradition has it that he traveled with Simon as a missionary. Jude is symbolized by a sailboat with a mast in the shape of a cross, or a long staff with a cross at the end, referring to his missionary journeys. Where the symbol of the lance or halberd (a weapon somewhat like a long-handled dagger) Is used, reference is made to martyrdom. Sometimes the lance is combined with a club and a cross upside down.

Thomas, the seventh apostle according to Matt. 10:3, was also known by the name of Oidymus, meaning “twin”. The best known incident with which Thomas was connected is recorded in John 20:25: “Unless I see in his hands the print of the naiIs, and place my finger in the mark of the naiIs, and place my hand in his side, I will not believe.” The carpenter’s square, a vertical spear, or a lance, or an arrow are the symbols of Thomas. Some writers say that Thomas built a church in India, doing much of the work himself. The square or rule refers to him as the buiIder or carpenter. The spear, lance, or arrow refers to his supposed martyrdom at the hand of Kinq Midsai for converting Queen Tertia, the king’s wife, to Christianity.

Phillip introduced Nathanael to Jesus, advising him wisely to “come and see” (John 1:43-51) if any good thing could come out of Nazareth. It was Phillip who said to Jesus, “Lord, show us the Father, and we shall be satisfied” (John 14:8), Phillip is symbolized by a staff surmounted by a cross. Sometimes a small cross is shown in his hand. Usually two loaves of bread are pictured, one on each side of a cross, to symbolize him. The staff and cross refer to his successful missionary journeys among the barbarians in upper Asia and Phrygia, where he spread knowledge of Christianity and the cross of Christ. The cross may also refer to the power of the cross over idols or to Phillip’s manner of death, although there is no conclusive evidence that he was crucified. The loaves of bread recall Phillip’s remark when Jesus fed the multitude: “How are we to buy bread, so that these people may eat?” (John 6:5). 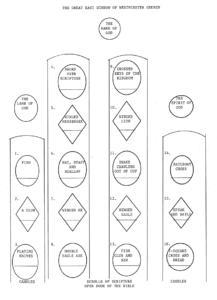